THE LAST VICTORIAN AND THE FIRST BABY BOOMER

The home of the author of the novels

‘No Precedent’ and ‘Where’s Sailor Jack?’

Nothing changed the social complexion of Britain quite as effectively as the 1944 Education Act. At a stroke of government, bright working class children were given a chance for further education that their parents could only have dreamed about.
Bob and Richard were two of those children. Grammar school boys from Lancashire, and friends throughout everything since, their education and abilities have led them up the success ladder in business and industry. Now in their sixties, they should, you might think, be enjoying the fruits of their life’s work. Well off, by most people’s standards, in some ways they are. But life isn’t ever plain sailing. As always, sex, love, pride, ambition and, not least, the past, ally to complicate things.
And in this thoroughly enjoyable first novel by John Uttley, himself a Lancashire grammar school boy of that period, we dive into the complexities of two families, each with its own problems as the clock on Bob’s and Richard’s mortality continues to tick. It could be the story of many of us of that so luckily blessed generation.

Journalist, Playwright, Novelist and the foremost commentator on the sixties

‘A High Fidelity for the original baby boomers’

I worked with John Uttley as a developmental editor on this novel, but please don’t think me partisan. Anyone who has read my work as a literary critic will know that I’m a straight shooter when it comes to good and bad writing. Where’s Sailor Jack? is a pleasure to read, and a great debut from a meticulous writer. I love this book simply as a reader, and I’m very happy to see it in print.

Where’s Sailor Jack? is by turns romantic, poignant, and extremely funny, exactly what I want from a family saga. Like its hero, Bob Swarbrick, this novel is charming, charismatic and complex, and reminds us that not all contemporary fiction has to mirror Hollywood, with metrosexual twenty-somethings charging about solving impossible problems. Where’s Sailor Jack? is measured and thoughtful, with a strong plot, believable characters, and an intelligent moral centre. I’m wary of labelling, and ‘boomer lit’ is a bit of a catchall these days, but if like me you won’t see fifty again then you will really relate to this novel. Uttley cannily keeps three generations in play, but his core characters are nearer the end than the beginning and thus look back as much as they look forward, still trying to figure it all out. One of the many questions the story asks (and answers) is will there be too much baggage when Bob’s ship comes in?

Bob is an engineer. He’s a working class Northerner made good, and his origins place him always slightly outside the professional class to which he now belongs. He was inspired by the cultural revolution of the late-fifties and early-sixties, and although he did well out of Thatcherism, his roots have left him with a rebellious scepticism in which corporate greed and leftwing intellectualism are held in roughly equal contempt. Since the failure of his first marriage he has been unable to sustain a serious personal relationship, and still carries a torch for his ex-wife, Jane (a feminist academic who steals every scene in which she appears). His best friend, Richard, is an investment banker with enough doubts about his profession to return a bonus. He now regrets his decision not to enter the church as a young man, although his wife is far from convinced that Christianity holds all the answers.

Now nearing retirement, Bob and Richard are working together for one last time on the flotation of a clean energy start-up company. Against this backdrop, Bob is offered two chances for love, one new, one old, while Richard’s apparently idyllic marriage is sorely tested. And all the while, in many different ways, major and minor characters search for some sort of meaning to their lives, from faith to politics to love, all of them in one way or another trying to answer the question the book’s title asks, ‘Where’s Sailor Jack?’ (Bob’s late father): Where do we go when we die?

There’s an honesty about the dilemmas and challenges these characters face, with a real insight into human relationships that brings an emotional depth unusual in modern mainstream fiction. What’s also unusual is that female characters are as strong and well realised as the men, while the philosophy of the narrative never gets in the way of a cracking story. The novel is never preachy, allowing different world views and inviting readers to decide their own answer to the book’s question. Either way, there is a fundamentally uplifting message, whether taken as Christian or simply Humanist and Existential.

John Uttley’s debut novel reminded me at once of reading Graham Greene on faith and Graham Swift on aging, with the sexual honesty of John Updike, the range of a John Irving family saga, and the quirky British humour of Nick Hornby – in fact, in many ways, Where’s Sailor Jack? is a High Fidelity for the original baby boomers. And the subplot about the flotation is a fascinating insight into investment banking by an author who knows that world very well. So forget about Christian Grey and find out how the real business millionaires live, with all the same doubts, fears, highs and lows as the rest of us. An utterly delightful book.

People of the post- war generation from the northwest will find much to relate to in this novel. It’s a good read.

Where’s Sailor Jack is by turn, romantic, humerous, religious and business driven, with a large helping of normal family trials and tribulations. I enjoyed meeting the characters and getting involved in their storylines and the descriptive portraits of the The Fylde and Lancashire was a treat to read as it is my homeground too. The central characters are very believable and I felt both sorry for and cross with Bob for his errors of judgement in life and could identify with Jane, a strong woman with a rather selfish personality when it comes to relationships! Helen’s attempts at extra marital romps were very funny as were reasons for failure, I enjoyed all the characters, both human and animal who entered and left the story, and shed tears when the exits were permanent.
John Uttley is an expressive writer and I hope there will be more to read from him.

A good read and a very entertaining follow-up to Where’s Sailor Jack ? As a Lancastrian born in the early 50s of lower middle class background with the good fortune to go to a grammar school and onto University, I could closely identify with the main character, Bob Swarbrick, and indeed the author himself. Many aspects of the book reflect my experiences and interests from football to musical tastes to the heartbreak of losing family pets.

The book enters into a wide range of topics from family relationships, religion, business, politics, north/south divide, football and cricket. And of course the inevitable evolution of changing attitudes and technological advances through the generations. The author relates all this with intelligence and I think reveals some profound insights on theological subjects and others.

The book demonstrates through its characters that ones origins can have a profound influence and can exercise a strong pull in later life to complete the circle as described in the book.

A wonderful follow-up to Where’s Sailor Jack? this time told by Bob and Wendy themselves. I laughed, I cried, I considered moving north. Poignant, funny, thoughtful and raw, No Precedent gives voice to the babel that is modern culture, as experienced by a group of very different families who all nonetheless love each other to pieces. 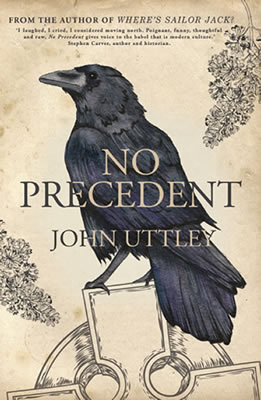